I recently did a infrastructure upgrade on my home lab, which included moving all my esxi hosts into a dedicate subnet, and making them all more dependent on DNS. This has it’s pros n cons, after all my ESXi host had their IP addresses changed. I also moved my vCenter and changed it IP address, which is now supported yay.

Now I had to move Veeam along with it, originally it was in the same subnet as the esxi hosts, and vCenter which have all moved, instead of trying to manage cross subnet comms, I changed Veaam’s IP address and pointed it’s DNS settings to my AD DNS which has all the ESXi and vCenter host records. Was easy enough just changing the Windows NIC Ip address, and changing the VM’s VMPG.

Now when I went to scan the vCenter instance in Veeam, it complained about the certificate, since it was renewed from the vCEnter upgrade. I decided I’d change it to be based on DNS now that everything else is as well. When I went to edit the object in Veeam it was greyed out.  Lucky for me Veeam had a KB ready to go.

The Name/FQDN/IP of the vCenter Server has changed, and needs to be updated within Veeam Backup & Replication.

Solves Name Change Only
This solution applies ONLY if the vCenter Server database has not changed.
(I did an upgrade so yes, which you’d want to preserve VM-IDs, and chains)

If the Name/FQDN/IP of the vCenter changed due to a reinstall or upgrade, and a new vCenter database was used, the Ref-IDs will have changed. Due to the changed Ref-IDs you will need to follow the documented process in www.veeam.com/KB1299

Prior to running the commands below you need to identify the Name\FQDN\IP Veeam is using to communicate with the VC currently. To do this, edit the entry for the vCenter under Backup Infrastructure and note the “Name:”.

Next perform the following steps to change that VMware Server’s name.

Launch PowerShell from inside the Veeam Backup & Replication console. You can find the “PowerShell” button under the File-menu’s “Console” section.

Run the following command next to change the name:

Replace new-name with the new name for the vCenter, this can be an IP, Hostname, or FQDN.
Do not remove the quotes on either side.
This change will go in to effect as soon as the command in Step 4 completes.

How I did it – One Liner

Now you can click next, Apply, should get right past checking certificate if the certificates are all good… and end up with the follow after rescan: 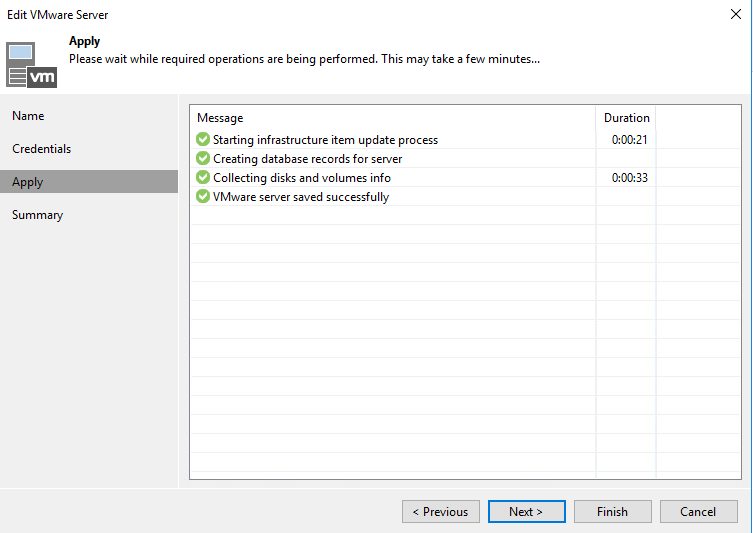 That was easy enough, I don’t fully understand why the grey out the UI to make this change, but there you have it. Happy Backups!

One Reply to “Change vCenter FQDN or IP on Veeam”