I wanted a 3D printer for a while since being introduced to it from our current hackerspace in the city; Skullspace. Check em out. Many of the awesome guys I know are right on the homepage. Amazing people.

Anyway, they had some first couple version that had many issues which had me worried when getting into it. However it turns out the Ender 3 has amazing reviews, and a solid following with it being introduced into some good software we will cover aa bit later in this blog.

So I finally pressed the trigger and bought a 3d Printer… since I got an amazon gift card I searched 3D printer on amazon and the main thing that showed up was a Ender-3 as their choice pick.

Was a really good price specially with the gift card I had. I got it really quickly too, and on top of it came really well packaged with minimal assembly required. I was a confused at only a couple steps during the setup so I watched this guys YouTube video to get it assembled. Which was an amazing help, he even provides upgrade parts you can print once you get the printer running, which I’m currently printing as I write this.

However there was one part I was a bit confused about and that was how to level the bed.

Now as mentioned by Vlad in his setup video, he was surprised to find there was no auto leveling. This doesn’t surprise me for the price of this amazing machine, beggars can’t be choosers and let’s level the bed.

For this I watched this great video by 3dprintingcanada on youtube.

After following these 2 video I was ready for printing and my first couple prints came out amazing. Of course this requires other basic knowledge I haven’t covered yet.

Now in order to understand what’s going on in the next bit it’s important to understand how 3D printing works. and that’s basically like this: “A 3D printer essentially works by extruding molten plastic through a tiny nozzle that it moves around precisely under computer control. It prints one layer, waits for it to dry, and then prints the next layer on top.”

In order to do this normally you model your object (with FreeCAD, or Fusion360, or whatever) and once you export your model out it usually comes in an STL file for a normal object file you can use to CnCing or other things… like “slicing” which takes the object and well “slices” it into layers which will determine the resolution of the final print (that and the diameter of the extrusion nozzle being used by the 3D printer.

Now normally you have to do some math’s and calculate all these things and enter their values into the Slicer of choice. Two top ones right now in the FOSS area are Cura and Slic3r. I have most of my experience with Slic3r and then I read about this gem; PrusiaSlicer!

Sure enough running it, out of the box I could select a profile for my Ender3 (having profile is a specific set of the variables I mentioned above already configured for specific printers out of the box). Since my Endor-3 was out of the box without any modifications (to the extruder nozzle mainly) I was good to go.

With the setup and testing off all parts good (as mentioned and linked to the two YouTube video to accomplish this) it was time to grab an object and slice it.

The first thing I printed was a Ghost from Packman.

Then I quickly went to upgrades to the Ener3, starting with the main upgrade which was the upgraded blower nozzle.

Over all the first couple prints without changing any infill settings, or supports were super easy going, and I’d say the industry has finally got it down pretty well and cheap enough I’d say go for it. This is a great starter printer.

Watch this video on more about how to customize supports in PrusiaSlicer.

If you run a 3D printer let me know what you run in the comments, or if you have suggestions.

Something about it that I loved, I rocked the vista themed copy for so long, you know when the Vista Fiasco was the Windows 8 fisaco, that was the uhhh yeah anyway… 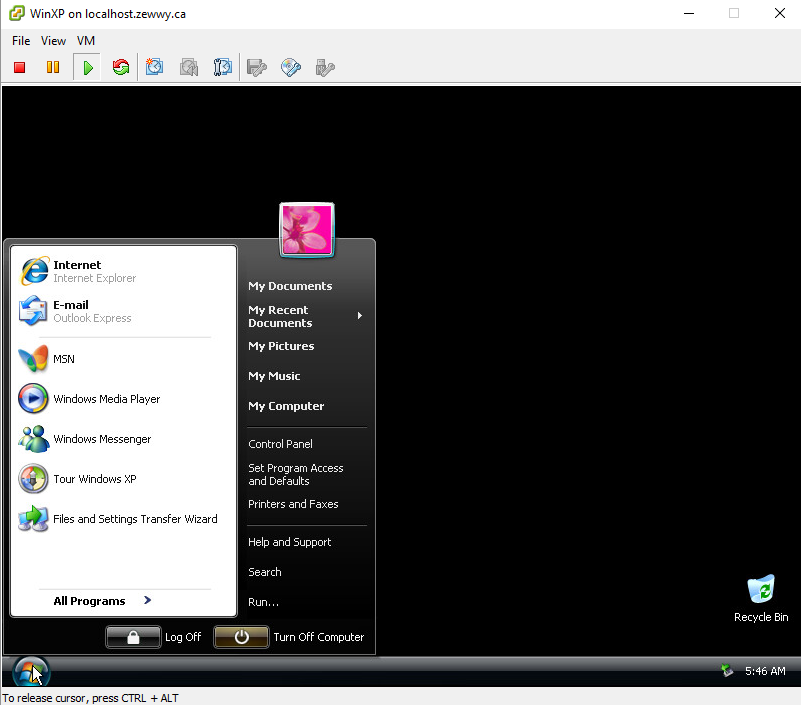 Just look at that dark epic theme, a couple pieces of junk, but nothing modern live tiles brings… a Japanese checkers board to appease someone with the shortest attention span one could ever imagine. But not this classic beauty, just look at that recycle bin, made from fine glass. 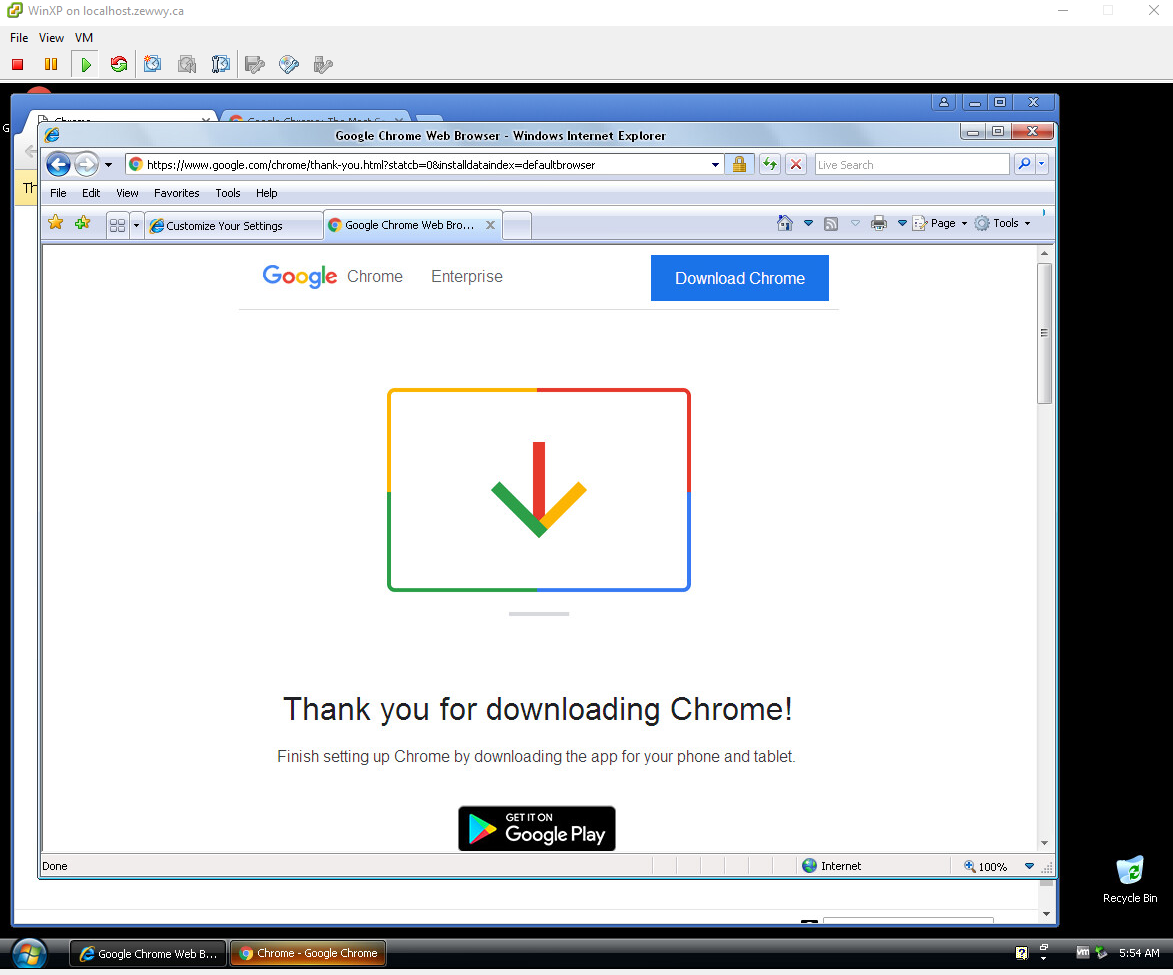 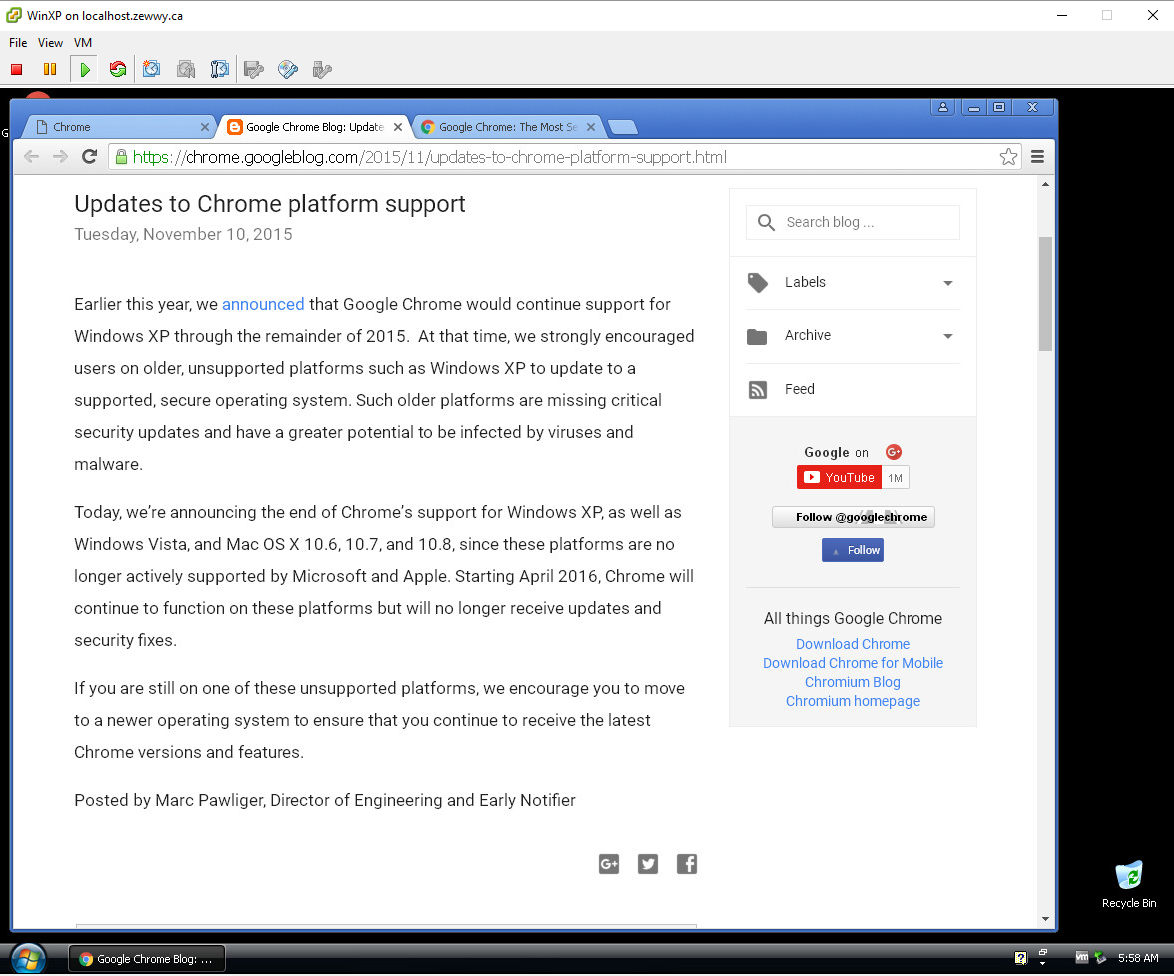 That’s just amazing, chrome supported XP till 2015, if there’s a die hard OS, XP was it. Holy crap… there’s people still commenting about this… like now… 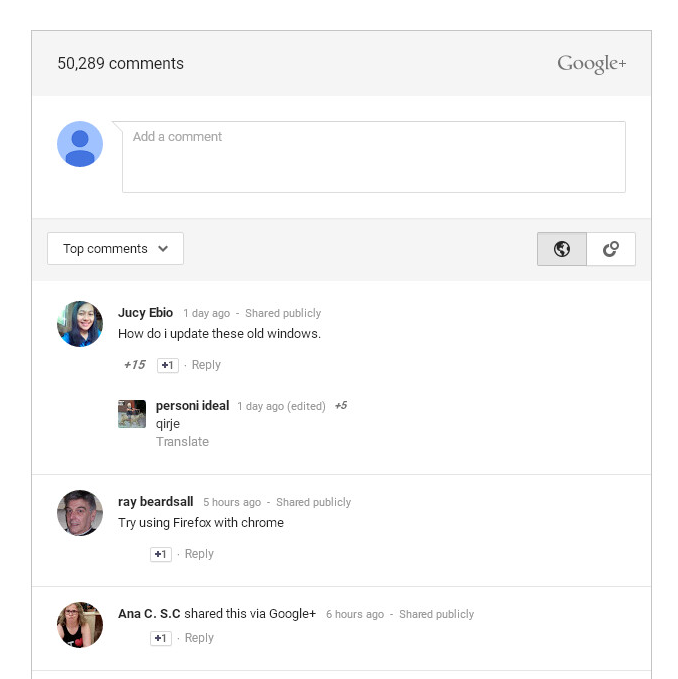 Well, if you’re lucky like me and my old netbook, they manufacture made and it’s third party hardware peeps made drivers up till Windows 7, so I managed to install Windows 7 with an SSD and my old laptop is great, regardless of how many people complain on these comments, haha. 😀 Which is crazy considering… 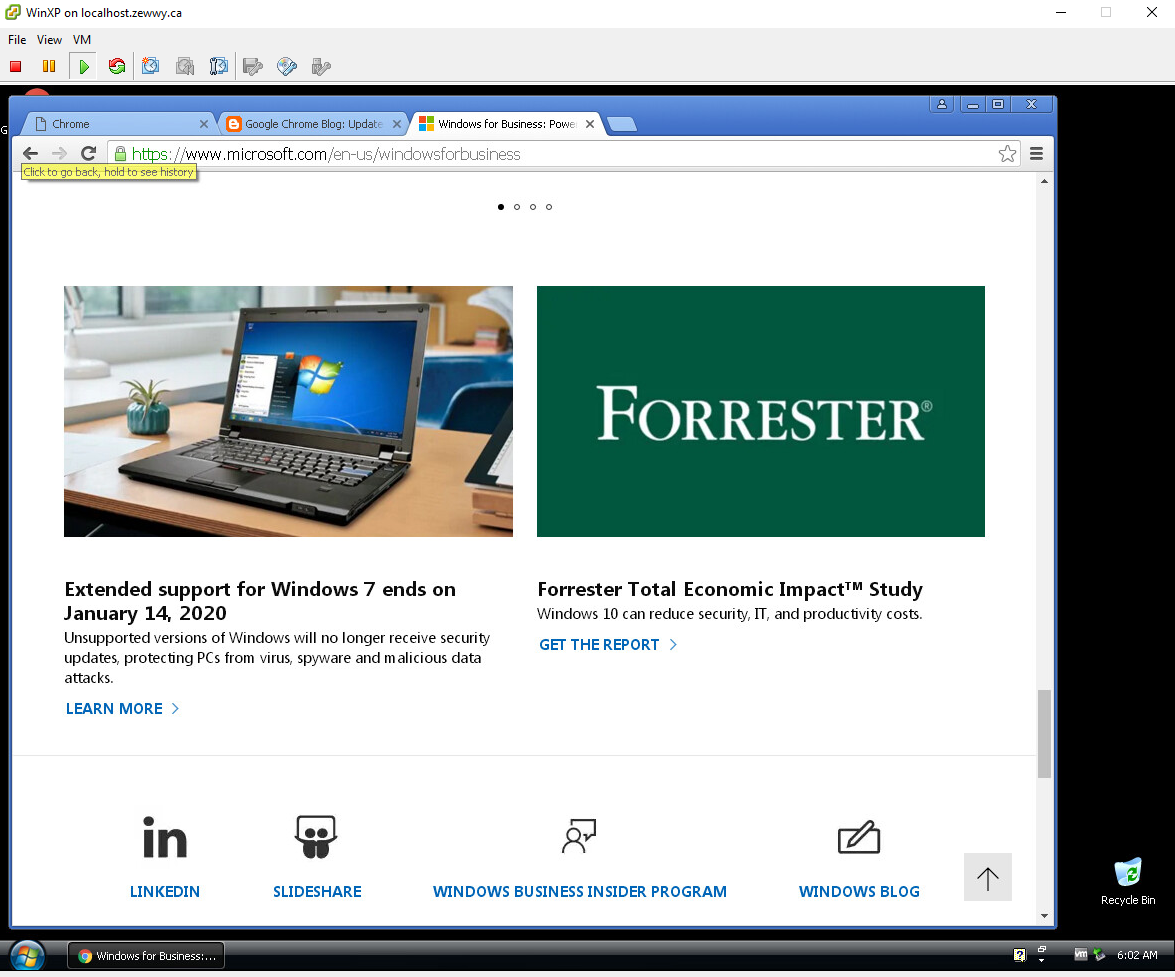 Yes, Windows 7 Extended support is coming up… Another Solid beast I hope gets the extended life support it deserves. :D.

This was pretty much just a blah post but whatever… xP

I just needed a VM to test my OPNsense VM lol, figured I had the old ISO why not…

Ahhhh Yes!!!!! The Classic editor where life is easy! 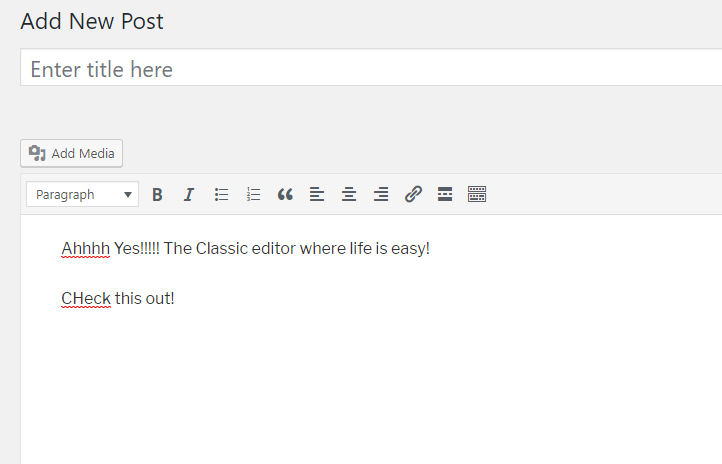 Ohhhhh man! That took me 2 seconds! and it’s perfect!

At least Classic Editor will be supported till 2021, and my guess with how crappy the new editor seems, it’ll probably be supported longer. like XP, good things die hard. New shitty things die fast.

Here I am, trying out WordPress 5+ and it’s new content editor.

I sound like like an old fart but I liked the old way, not that I don’t like the ingenuity and clearly the scaleabilty of the new way, but things were obviously missed…

for instance I used to be able to paste my imgur links and then using my old plug in options mark them clickable and pop out. Now if I paste it, it tatoos the living crap out of the image with imgur crap all over it….

But hey at least I can caption my shit and move them around, cause you know how often I screw up the order of my post when I make them….

This paragraph, I can, cause you know how people love to mess up there paragraphs and have to rearrange them all the time!

Now when I press enter it simply adds a new “Document” block, so If I wanted this paragraph after ^ That Paragraph.

If that was confusing trust me so is finding the Point of these “blocks” if I had maybe some horizontal control I could see some use, but it’s literally just vertical, up down that’s it… wooo, man it was so hard before selecting content with the mouse and using, keyboard shortcuts (Ctrl + X to cut, move to location, Ctrl+v to paste) in those times you needed to re-arrange… boy that stuff sure was hard to do. I’m glad I have blocks now to waste my life learning how to get something simple as my old pop up image plug-in to work again….. Pricks….

Time to install the Classic editor!

Actually I created my account apparently over 6 years ago :O…..

Sadly in those 6 years all I contributed was a couple really lousy DDWRT scripts…. and that OS was painful as getting help with it was near impossible.

I’ve updated my blog social links to include my GitHub Link. I moved my PowerShell Center Write-Host function there. I hope to move my SharePoint script I had written for the SharePoint migration at work. As well as some other contributions coming up soon. Maybe I’ll fork GhettoVCB and finally do part 3 of my Free Hypervisor Backup series. I’m sure everyone’s been waiting so eager for. 🙂

This was a short one. I hope to provide some more meaningful content in the short while. Just been a rough couple days recently.

I wanted to do this since I noticed my one header being really long and was unsightly… I decided to google this, like I google everything…

First one I found, I didn’t want to dink with code, I like coding but mostly PowerShell (If you haven’t noticed based on my categories)… Sorry you’re out!

Second one I found, I didn’t like cause it used a plugin… However there’s always something great to learn form the comments, specially “pessimists” *Cough* realists such as this great comment by “KRZYSIEK DRÓŻDŻ”

“Wow, you really need a plugin for that?

Why don’t you just insert tag? Installing million plugins, that aren’t doing anything really isn’t a good idea… Especially, if such plugin is not popular, so very few people have looked at/controlled it’s code (this plugin had 30 active installs).”

Made me gooo, waaaaaa that’s it? So sure enough I add <br> in my Title, and Bam! The Title is split on 2 lines, now that was easy. Thanks Krzysiek!

Looks like my third source basically does the same thing.