So the other day I added a new Windows managed server to Veeam and as usual I came  across some errors and issues that had to be resolved, and some tips on what too look out for to resolve them. Besides the one error being used for two different issues (network vs authorization), it’s generally not that bad and easy to decypher exactly which of the two is the cause. However sometimes you come across an error that seems to have multiple causes and knowing which one it is can be sometimes difficult to diagnose.

Today was one of those things, after adding the newly added managed server as a Veeam vSphere Proxy I was hit with this error when attempting to complete any replication jobs…

Googling this I found one post on the Veeam forms that was a basic dead end.

And this nice thread on Spiceworks.

The only thing different between this Proxy and my other one was that it was not domain joined, which I didn’t see as a pre-req… and sure enough it’s not, but in my case it was phlights response that nailed it for me:

In my case the error showed the vcenter server by the hostname that was not fully qualified, domain joined machines will auto add the domain suffix on a DNS request, but in this case a standalone system, even pointing to the same DNS servers, won’t. As soon as I saw this I had two options:

since I didn’t need this system to do any other particular domain looks up I simply did #2. Then my Replication job worked. Why it didn’t fall back to another proxy that did work is beyond me…..

Unlike most other blog posts that seem to love to follow the “happy path”, that never happens with me so I’m going to go over this cause something WILL go wrong…

Now I got this as my first error attempting to add the server:

The second error I got was:

This issue is not Veeam specific rather MS specific, which has been the case since the inception of Windows Vista.

If you are in this boat you have 3 options:

This adds a reg key to disable UAC. as Mentioned by Gostev why this isn’t done automatically as it’s a security risk. No solution seems good here (besides domain joining). In this case it’s better to just use to local admin account… ughhh. 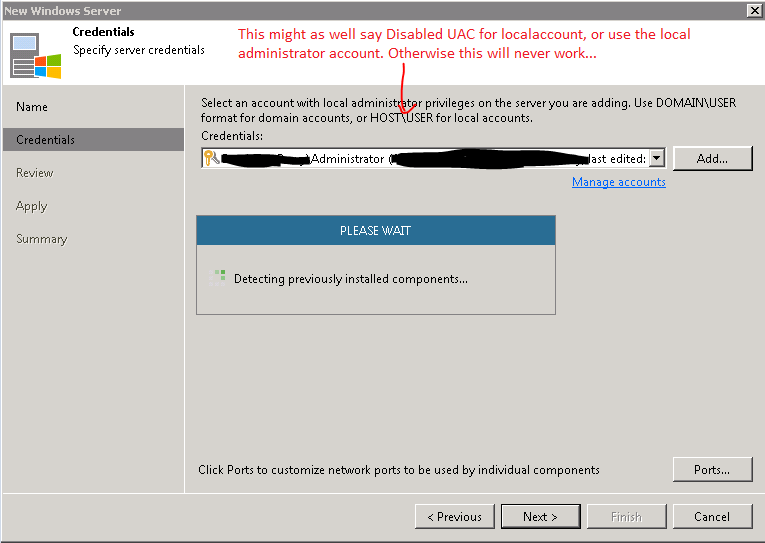 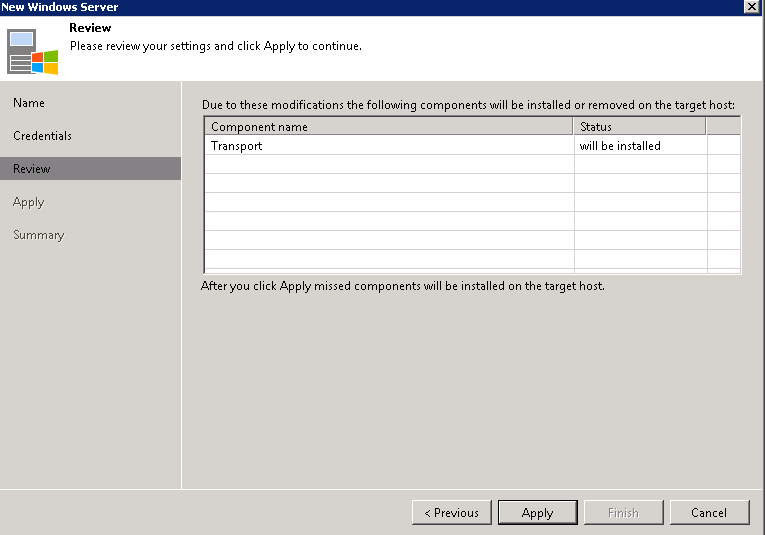 The rest of it’s a wizard, if you got to this point there should be no other major issues moving on…

Yeap, the one thing you don’t want can happen at the worst time. For me I was testing a hypervisor upgrade scenario, and my host sure enough failed to come up successfully. Well…. shit.

While I was going crazy trying to bring my host back up (the stock ESXi images wasn’t good enough cause…. RealTek, yeah… this Mobo I picked was an overall bad choice, sad cause it’s ASUS… anyway…

ughhhh, what? this is a standalone server, not domain joined, no special services account or MSAs, or separate servers, like what gives?

Event viewer is literally useless… as nothing shows anywhere for any hints.

OK so, the usual, google, and let’s see here…

Like other symptoms not much help and a generic console error, so this fix was worth a shot, what I took away from it was how to do a manual DB backup (assuming this is all the settings and configurations if re-install required) and some registry keys used by Veeam and that this was not the problem (not the droids you are after). I thought maybe I had updated and not tested, as I do tend to do shutdown instead of reboot, with my limited resources and well windows is heavy on resources.

But sadly no good, as I guess my issue is not related to any lock files on the SQL DB… ok so what else is there…

So I started reading this one and at first I was thinking, yup same problem, and reading along, I like Foggy but them not sharing the answer was rather annoying… then after some others reported the solution and my jaw literally dropped (probably why they tell you call support, cause this is some dirty laundry…)

“It is very likely to caused by the changing of the host name, do refer to the following link, i managed to my Veeam service started again.”

sure enough running the req query command and hostname showed I had indeed changed the hostname to something more suitable AFTER installation.

Why they’d rely on a reg key vs a simply enviroment variable is really beyond me, cause the problem with using a reg key for this is pretty clear here….

So let’s try to fix this, thanks to the second guys reply by spacecrab:

“I know this is an old post, but thank you for replying with this information. I installed Veeam Backup and Replication before changing the default generated hostname, and it was really throwing me through a loop. The fix noted at that url worked perfectly after I rebooted to reset the services. I’ll relay the content here in case that sources goes away.

In my case I had renamed the computer from a default WIN234dfasd type name to a ‘much’ better alternative. Veeam refers to the local computer name in a couple of registry entries and promptly stopped working – which we didn’t notice until later.

Backup of the site’s Virtual Machines is now running again.”

alright let’s update some keys to be Veeam…. I just used reg edit to do this vs figuring out the exact query (although I probably should figure out a query in-case other keys but meh….

and after a reboot… Woah! all the Veeam services are running, sure enough I can connect to my standalone Veeam Server! Wooo thanks Spacecrab!