Well back to work, so what other than another story of fun times troubleshooting what should be a super simple task. When I was hit with a delayed greyed out screen on the management UI and the subsequent error.

Let’s see if others have hit this problem:

First ones a dead end.

Second and Third basically state to ensure legit email addresses are applied to both to and addition to fields. My case I know the only one email to address is fine.

And finally the How to By Palo Alto Networks themselves.

Well that’s annoying, bascially tell you to ensure the email server is accessible but they do so from other devices cause the PA can’t even do a telnet test… uhh ok useless, I know it’s open.

I had contacted my buddy who specializes in PA firewalls. There are some things to note.

Now even though I had a “clean up” rule as stated by Joe. I was still not seeing the traffic being blocked (and I know it was being blocked).

Once my buddy told me to override the intrazone rule and enabled logging on that rule, I was finally able to see the packets being dropped by the PAN firewall within the Traffic Logs/Session Logs.

Sure enough it was my own mistake as I had forgot to extent an existing rule which should have had the PAN’s gateway IP within it. After I noticed this I extended the rule to allow SMTP port 25 from the PA IP (not the mgmt IP) I was able to send emails from the PAN firewall.

Also note I ensured a dedicated receive connector on the email server to ensure the email would be allowed to flow though. 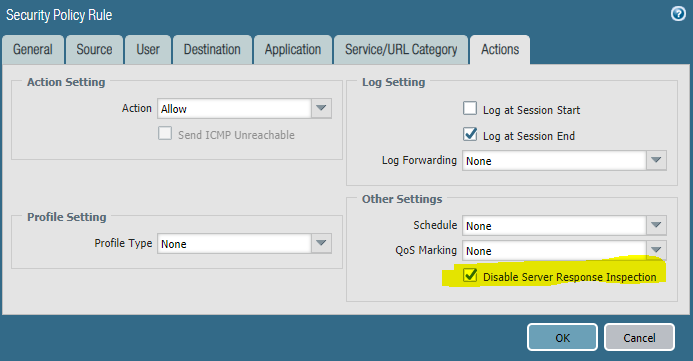