I love this thing, I remember when I first read my first blog posts about the specs, and what it could all do…

Those are some good specs for 2010, pretty much a decade ago. and most of the blogs touted DD-WRT, which I joined the form site way back in 2012… looking back at my old posts didn’t seem to get much of any help… but sure had oddities I was recently running a KongMod of DDWRT (build 22000M) Circa 2014, looking it up found out he stopped to made modded firmware for OpenWRT. I grabbed the latest DDWRT for my router using the DDWRT database factory reset settings, cleared NVRam and used IE with a windows laptop with static IP bound to port 1 on the router….

Gave the system enough time to boot, but noticed the pings were not coming back up, the Power light would flicker during boot and then stay off, while the wireless LED said lit.

I thought I may have soft bricked it, so I grabbed the stock firmware and flashing tool from ASUS website to my dismay even though I could press the restore button and have the power LED blink slowly indicating it ready for TFTP file, even the flashing tool would fail either that its not in flashing mode, or faiiled to flash. I thought I was hooped in this case and was in a soft lock loop, and thought I would have to JTAG flash it…

Then for shits (since the WiFi LED was on) I wondered if it was broadcasting… and when I checked for a available WiFi on my phone I was shocked to see it was, I connected, shocked again, and could ping the router… wait what??

Sure enough I could see the DDWRT web interface.. I was stumped and started to Google, but only found one post that was dead on… but as I figured the solution provided did not work for me, well the vlan1 check setting BS.

There was another bunch of posts stating to add commands “swconfig dev eth0 set enable_vlan 1” or some crap, yeah that didn’t work either. Even though people said don’t do it, I decided to use the DDWRT web interface Firmware Update section over WiFi (either was would have to JTAG flash if it failed) So at first I simply used the K2.6 Mini build instead of the mega, after the flash the exact same shit, but the power light at least stayed on. but again could only connect via WiFi. Since the only other answer was “I flashed a newer firmware” which is a timeless statement lol which exact version who knows, and I sadly didn’t have the old Kong build if I simply wanted to go back.

I was about to try OpenWRT when I decided to look at Tomato again… so flashed it via the DDWRT firmware update section (Fuck you DDWRT) and to my amazement it came up perfectly, Wifi was fine, and I could ping it on a physical LAN port again. Woooo!

Since I wasn’t used to the interface I did need a bit of a hand getting it setup as s simple AP again, guess it makes sense DHCP is set at the bridge so if you want to setup different NICs for different subnets and still have their own DHCP, but in my case I wanted none.

Then I read this nice post by How-To-Geek on configuring traffic monitoring, something I never had on DDWRT, so not only is the new UI a fresh change, so are some of the features. I really hope also a lot less bugs. Cause DDWRT with OTRW was buggy and a HUGE PITA.

Well googling did show there was the possibility… and installation seemed straight forwarded enough… of course both guides being 8+ years old, wasn’t too compelling, so I checked if the source referenced script was still accessible… and it was! Nice, checking the script out I see another external reference source and check it out too, amazingly it’s still reference-able too.

So I followed along, starting by first attempting to create a partition (512 MB, labeled “optware” as ext2) I did this by USB pass-through of my USB stick to a Mint Linux VM. Then simply using gparted created my partition, I also created a 1 Gig, and 2.5 Gig ext 2 partition labeled whatever with the spare space. (I tried a 4 Gig partition, but… it failed to mount so stuck with the recommendations).

Ran the installation as suggested…

I did this of course after verifying that indeed my partition was mounted as /opt, and the script ran without issue.. .amazing…

after that, I first installed htop, cause lets face it, normal top sucks…

I followed this up with the main packages I actually used, screen and irssi. This allows me to have a persistent IRC chat client (given the AP/Router doesn’t reboot)

Now I remember specifically having issues with DDWRT, and adding standard users with limited permissions. Specifically with the name showing up weird…

So I searched quickly to see if it was possible, and if so how people were doing it…

much like the guy in the first link, I didn’t quite follow what was going on and then after checking each line, eventually it made sense. (Basically defining specific environment variables, and special actual files with embedded lines that are all saved to NVRAM, then a script (3 lines) is run to populate the linux user list)

I did add “adduser” but much like mentioned elsewhere it would complain about not having “passwd”, there was no packages for “mkpasswd”, or “makepasswd”. I wasn’t in the mood to change my root system password and run a single stupid line to set one users password … :S (

Instead much like the alternative suggestion on the page itself “You can also cut & paste passwd and shadow entries from another linux box.” which is exactly what I did, using my Linux Mint VM, I used openssl passwd with a salt to generate a MD5 hashed password.

Now I was able to SSH in with my new non root account, YAY! 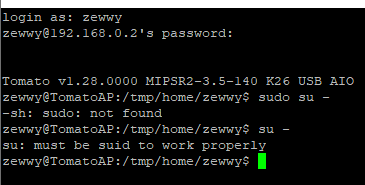 Now according to the source “These commands need only be done once for each custom username. Thereafter, the user will always be created every time the router boots up. To delete a user, edit /etc/passwd.custom and /etc/group.custom and delete the line with that username, then save them to nvram.”

mhmmm is it going to work….? Oooo… account is there after reboot in passwd file… and line exists for account in shadow file, and home dir exists… lets log in… well shit… the password didn’t save… still same as root even though they differ in the shadow file… k… let’s make a new one… save in shadow file, relogin, yup password changed. and now change in shadow.custom and save, and reboot…. arrrrggggg C’MON

Maybe you have to run that setfile commands when changing a file set to nvram? second try… there we go! success.

Screen, Irssi and the fun Stuff

It’s been a while since I had to reconfigure this stuff so someone’s blog to help me along the way, and it’s rather old now… but still good stuff and this simple one

and then run irssi 😀 (by typing irssi and hitting enter) 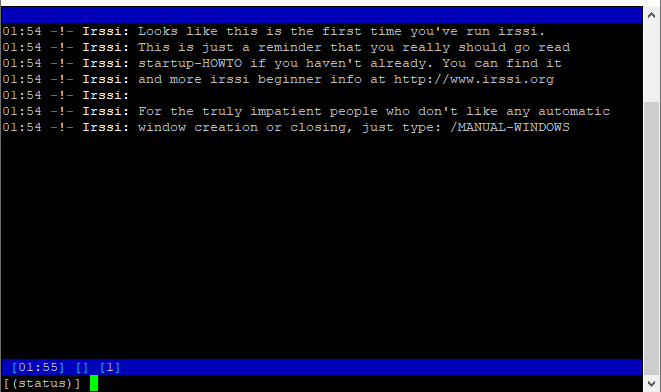 to make adding to Freenode easier instead of having to type /connect irc.freenode.net I’m going to setup a reference much like the existing reference from the above command:

The above shows names, but not there DNS lookups which is the server list

To add our reference:

Now that we have an auto connecting server, we’d like to specify the user and login details:

Now that my usual helpful sources are added (you can always catch me in one of these places) let’s test it all out… run /quit and then irssi again. Which worked! I was joined to my server, authed and joined to my channels 😀

and finally “Ctrl + A then Ctrl + D . Doing this will detach you from the screen session which you can later resume by doing screen -r .”

See you on IRC!