To see USB device on host, stop arbitrator service, save to config, reboot

Now the hard parts, normally even following guide to see USB stick on host mount 4 gig volume, I had 16 gig cruiser to use.

Perform a lspci -v to get all the USB UHCI and EHCI controllers to show up.
This shows up for example as: 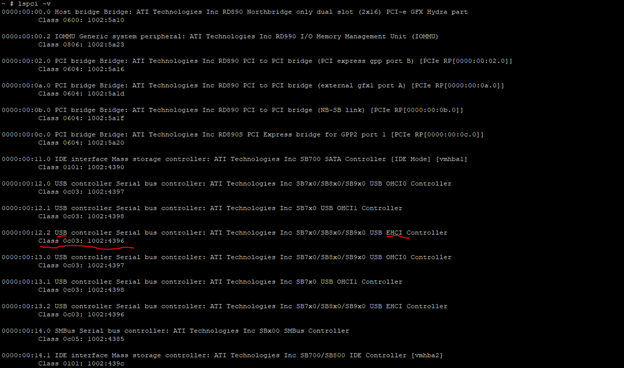 In Short, it’s not supported. If you’re running Workstation 9 or above, there’s this trick.

Now this guy goes into the real nitty gritty, and I love that! I however was working with ESXi 5.5 u3b. Now VMware did the same thing with the ESXi hypervisor and introduced USB 3.0 support via the xHCI controller. However the exact same limitation apply.

1) Drivers of USB 3.0 Host Controller are not provided by VMware Tools.

2) VMware USB 3.0 Host Controller will work only if your Virtual Machine OS has Native USB 3.o Support. Examples of such OS are – Windows 8, Windows Server 2012 and Linux Kernel 2.6.31 and above.

He goes on to say he’s screwed, but I’ve found the older EHCI +UHCI controller works for USB 1.1 and 2 devices I haven’t fully tested all case scenarios however. .For a Windows Server 2016 VM, on a HP Gen9 server with ESXi 5.5. My findings were as follows:

I wasn’t sure why the USB 2.0 Device didn’t show up, so I simply removed the xHCI USB controller, and instead installed the EHCI +UHCI. Re-Connected the USB 2.0 devices and added it to the VM, this time the device did show up. I can’t remember the exact performance counters. I’ll update this post when I do some better analysis. My plan is to script some I/O tests using diskspd and PowerShell. Stay tuned. 😀

I’m also going to see if I can connect the same USB device via hardware pass-through instead of utilizing the USB controllers and Devices VM settings options. I’ve manly done this with RDM’s and storage controllers with storage type VM’s (FreeNas mostly).

As for the main point of this post… I figured the main link I posted and this one here as well form the VMware forms that I’d be able to get a way to make the xCHI controller work on the Windows 7 VM guest. The answer is basically grab the Intel xCHI drivers for Windows 7/2008R2 from Intel and install it manually, not via the setup.exe.

To my dismay I couldn’t get it to work, the wizard simply couldn’t locate the device (since the hardware IDs didn’t match) and installing the otherwise the device wouldn’t start.

I even decided to try and use double driver (extracts drivers) against a newer guest OS. This also failed. I simply couldn’t get it to work.