Requirement: MacOS, or something like it to play with the OS to support people.

Problem: Don’t own a Mac.

Well… Yeah this is a thing. Need to play with this so here we go?

Sources: How to Install macOS on VMware in Windows PC [Mojave] | by BuildSomeTech | Medium

No ISO is usually available directly from Apple, So you have to create it… with a Mac. Well I don’t got one of those, so nopers, on that.

Solution… Trust someone else to upload a clean version of the ISO, source blogger above did that, but again have to trust the ISO.

Too many people want this ISO now… have to bypass the download quota. Spoiler requires a Google account. I wasn’t exactly sure but after logging in I was able to create a shortcut of the source folder into myDrive, then create a shortcut to that, then download the file directly.

Once I got the file I extracted it with 7zip and entered the password provided from the source blog post. I then proceeded to create a new VM on my ESXi 6.7 hosts managed by vCenter 6.7.

Only main thing was much like the source was to pick the MacOS under other: 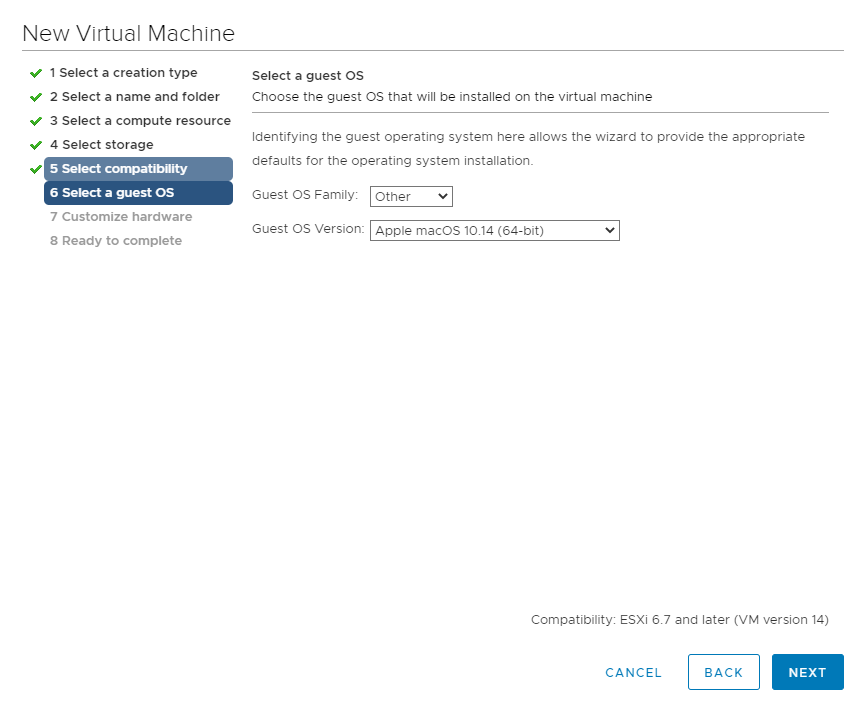 I was not as nice with the hardware specs and left them default minimum: 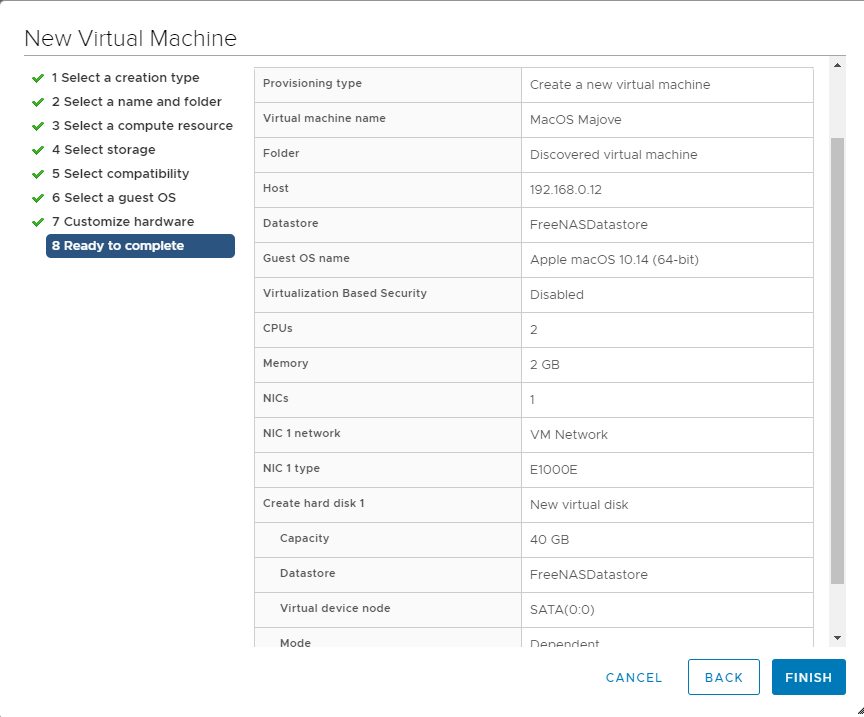 Ahh crap, I have to up the memory, to “min 4 GB”, fine, my host not gonna like me haha. So right click the VM, edit settings, bump up the memory to 4GB, while we are here, click VM options -> Advanced -> Edit Configuration 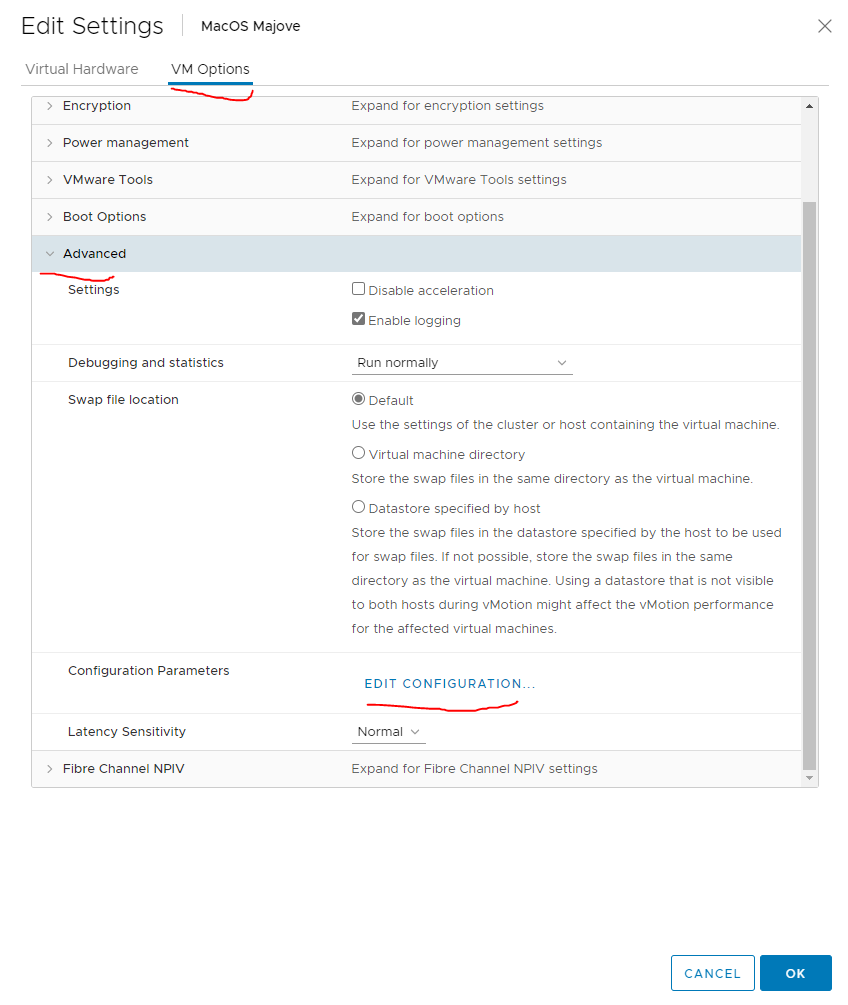 Then add a config: smc.version with value of 0 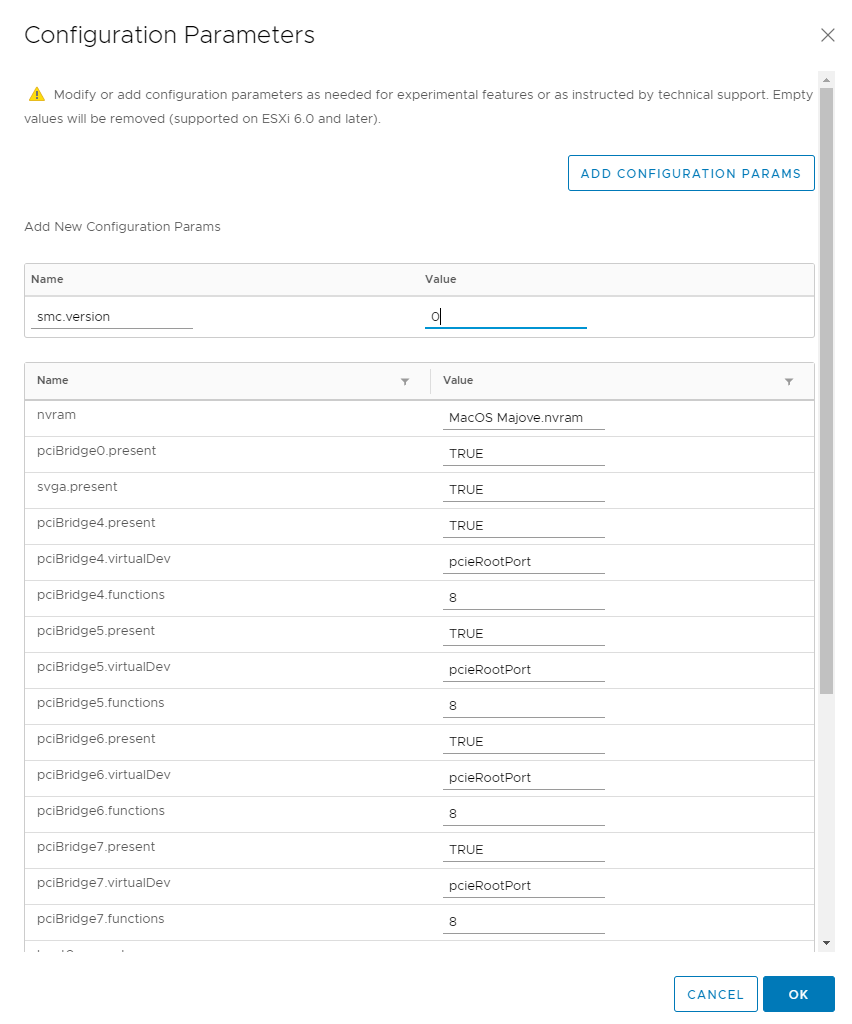 Also ensure to force boot into BIOS/EUFI menu so you can mount the ISO from above. Little trick (the Disc icon is greyed out till the VM is powered on in the VMRC (VMware Remote Console). So you can mount it and reset the VM to boot the ISO. 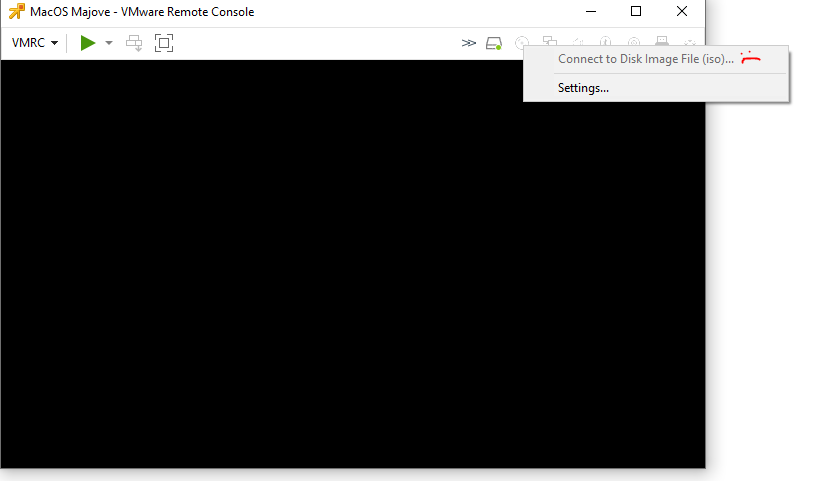 I got an error telling me that there are no compatible hypervisors, wait what?

Ohhhh!!!! Classic Apples, that’s why all these other guides are using an “unlocker”

“MacOS is only able to be installed on Apple-branded, official hardware. Apple does not license you to install it otherwise. By using that “unlocker” program–which is actually a circumvention or “crack” device–you would be violating the EULAs of both Apple and VMware. So, the only way you are legally able to run MacOS in a virtual machine is on official Apple hardware. Any other installation type is illegal.” – daphnissov

So I went created a temp account on the unlocker site, downloaded the 208 version and ran it on a test ESXi host I had: 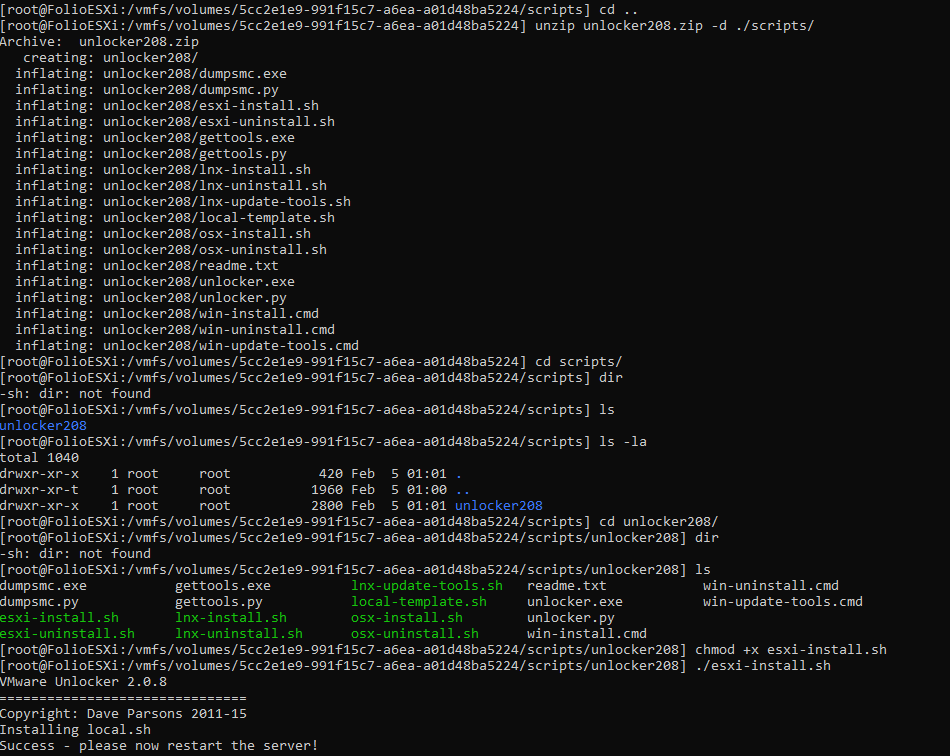 and rebooted it… Server rebooted, create new VM, set guest to MacOS and…

man… FFS… after even more research, managed to find newer version of the unlocker from better open sources (Git) 🙂

Like this one, and this one and one other one my colleague pointed me to, but I don’t have the link. Either way, downloading the package and running the command to install….

for reals…. this project is pissing me off.

So after Googling this, I found this reddit thread...

“the unlocker.tgz is not included in the master commit , dunno why, do this…” -KciNicKGX

Well **** off…. my nice colleague managed to check ou the build python script and noted a view things, and managed to create a unlocker package for me with the required unlocker.tgz file with in it… using it…

Finally! I can pick GuestOS MacOS 10.14 and the VM actually Boots! 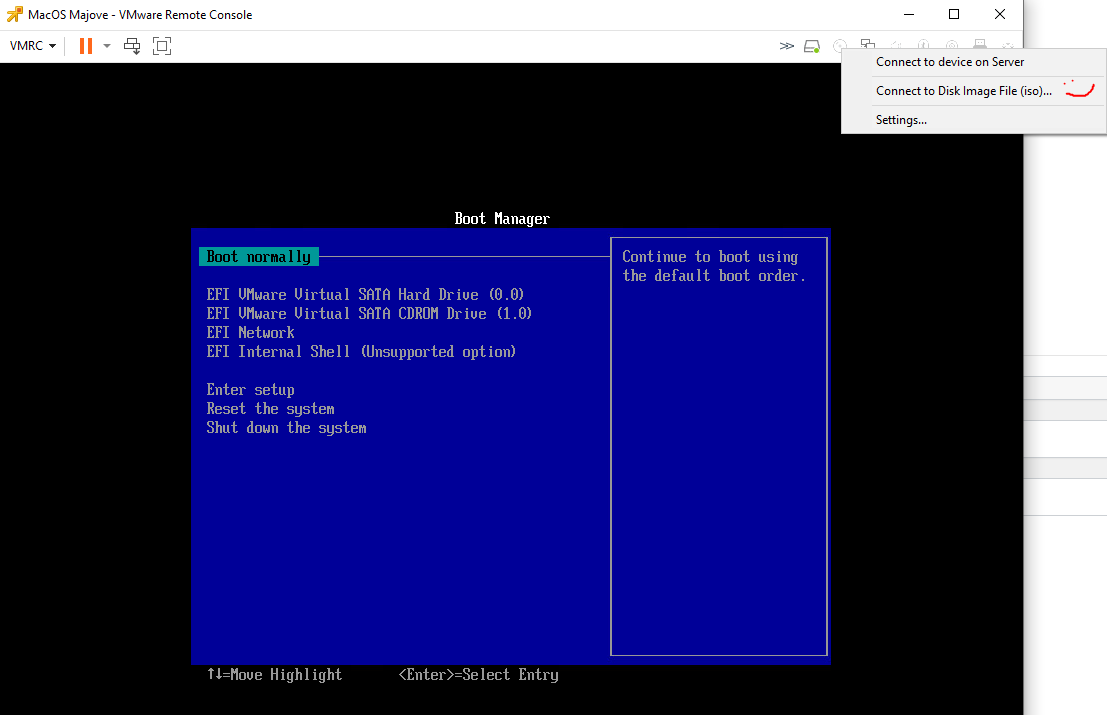 don’t let the greyed out icon fool you, just right click it and you’ll be able to mount the ISO from your local workstation without having to upload it to a datastore.

Let’s mount the ISO we had such a hard time getting above.

so I finally got an Apple logo wooo.. 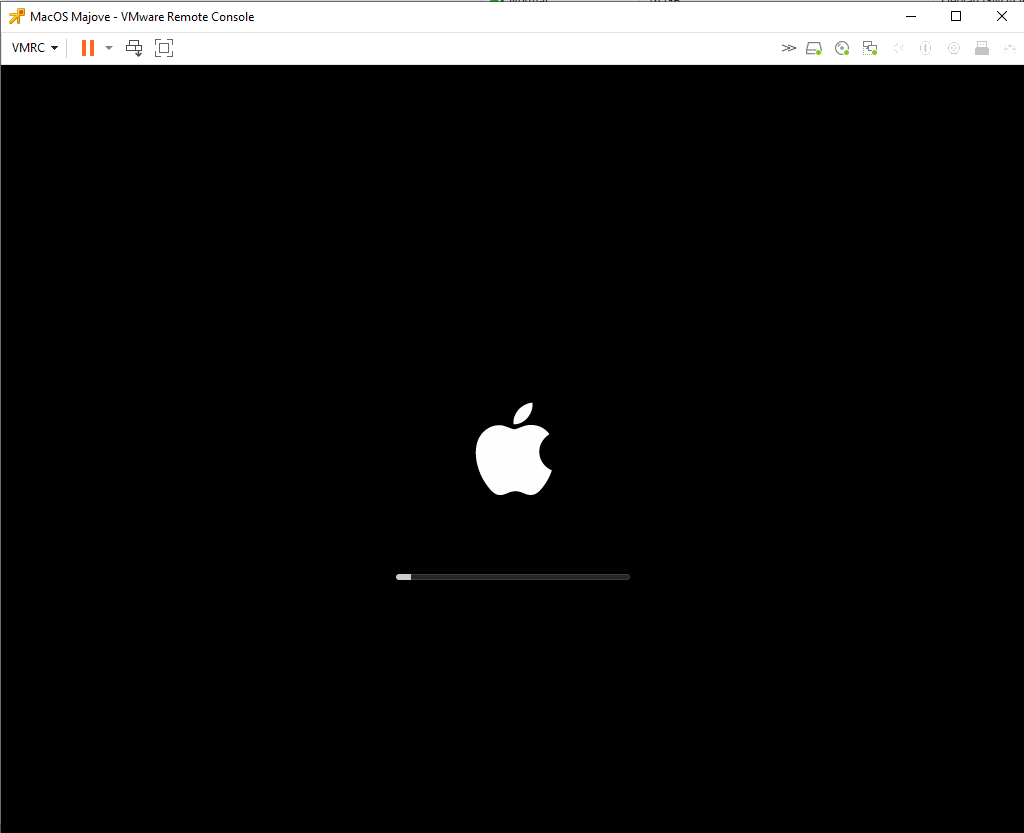 I found one other reference to a boot loop, all the comments state is to try alternative ESXi host version, which right now I don’t have.

You know what… Fuck this stupid ass fucking dumb shit.