For more in depth detail check Palo Alto Networks Page on the topic. Since the Palo Alto are very good Layer 7 based firewalls which allow for amazing granular controls as well as the use of objects and profiles to proliferate amazing scale-ability.

However, if you been following along with this series all I did was setup a basic test network with a single VM, going to a couple simple websites. Yet when I checked my ACC section I had a rating of 3.5…. why would my rating be so high, well according to the charts it was the riskiest thing of all the Internets…. DNS. While there have been DNS tunneling techniques discussed, one would hope PAN has cataloged most DNS sources attempting to utilize this. Guess I can test another time… 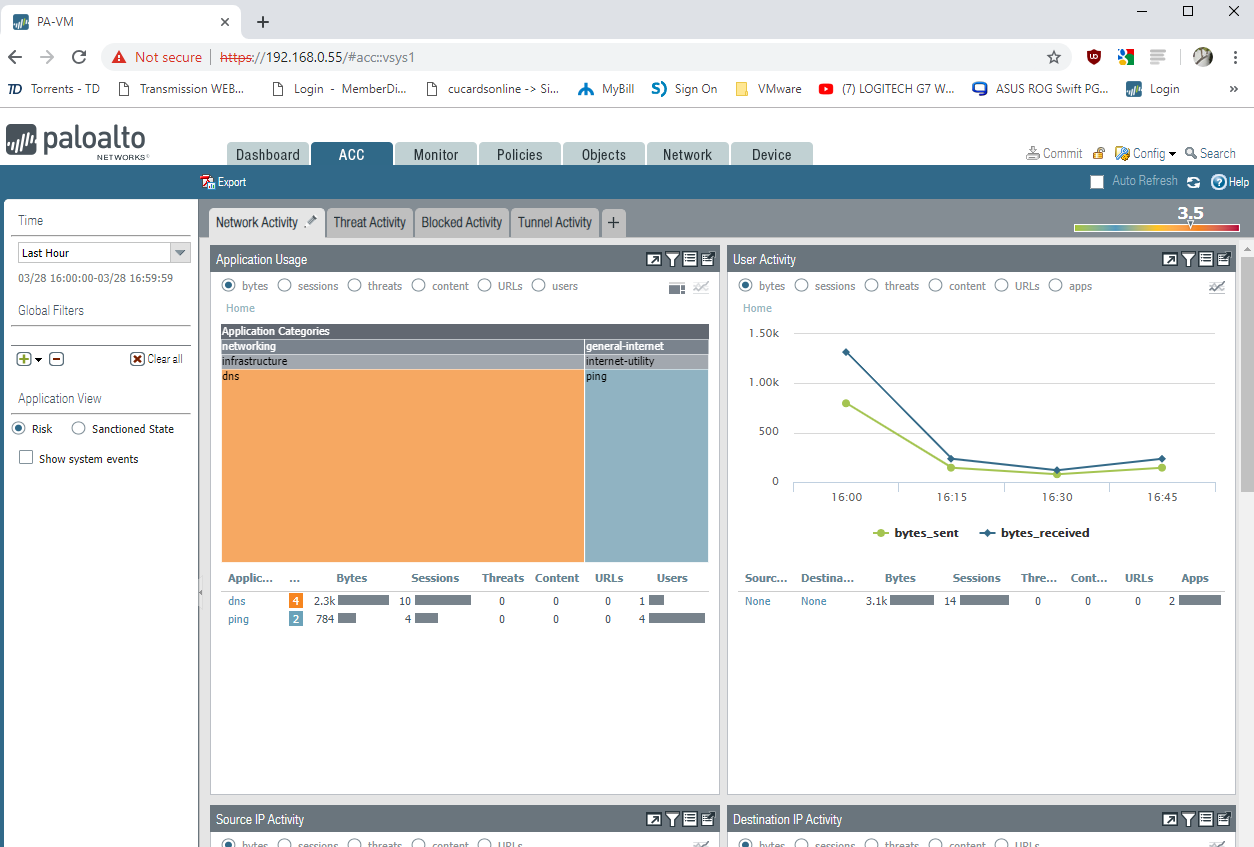 You may notice the user is undefined and that’s because we have no User ID servers specified, or User ID agents created. Until then that’s one area in the granular control we won’t be able to utilize till that’s done, which will also be covered under yet another post.

I did some quick search to see why DNS was marked so high, but the main thing I found was this reddit post.

Hardy har har, well can’t find much for that, but I guess the stuff I was talking about above would be the main reasons I can think of at this time. 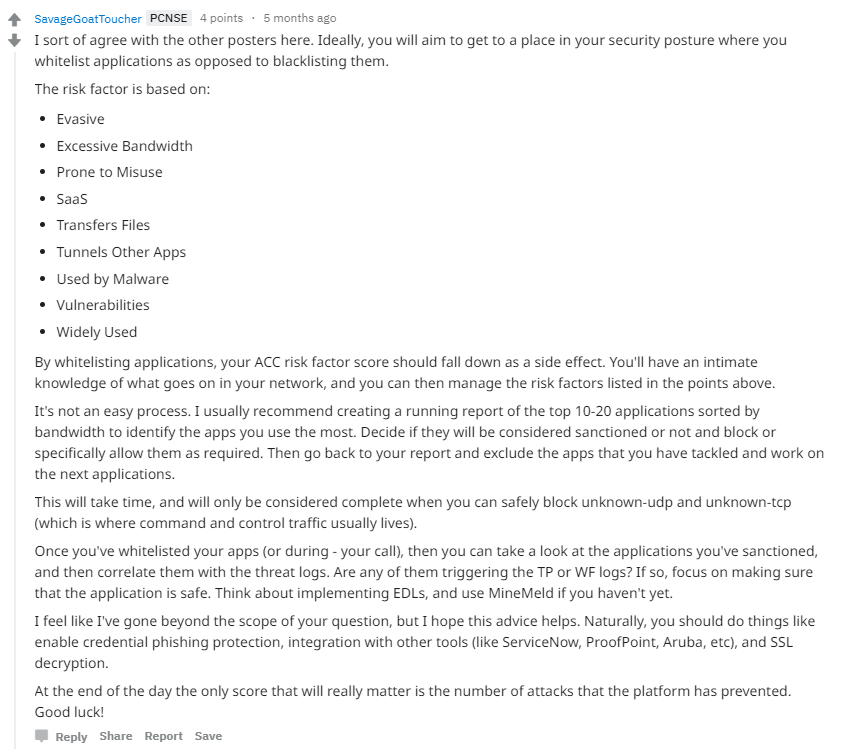 so we got the power, it just takes a lot of time to tweak and adjust for personal needs. For now I’ll simply monitor my active risk with normal use and see how it adjusts.

For now I just want to enable WildFire on the XP VMs internet rule to enable the default protection.

Has such a nice ring to it… even though wild fires are destructive in nature… anyway… this feature requires yet another dedicated license, so ensure you have all your auth codes in place and enabled under Device -> Licenses before moving on.

Now this is similar to the PAN URL categories I covered in my last post. Yes, these are coming out at a rather quicker than normal pace, as I wish to get to some more detailed stuff, but need these baselines again for reference sake. 😀

You will again see a default rule you can use: 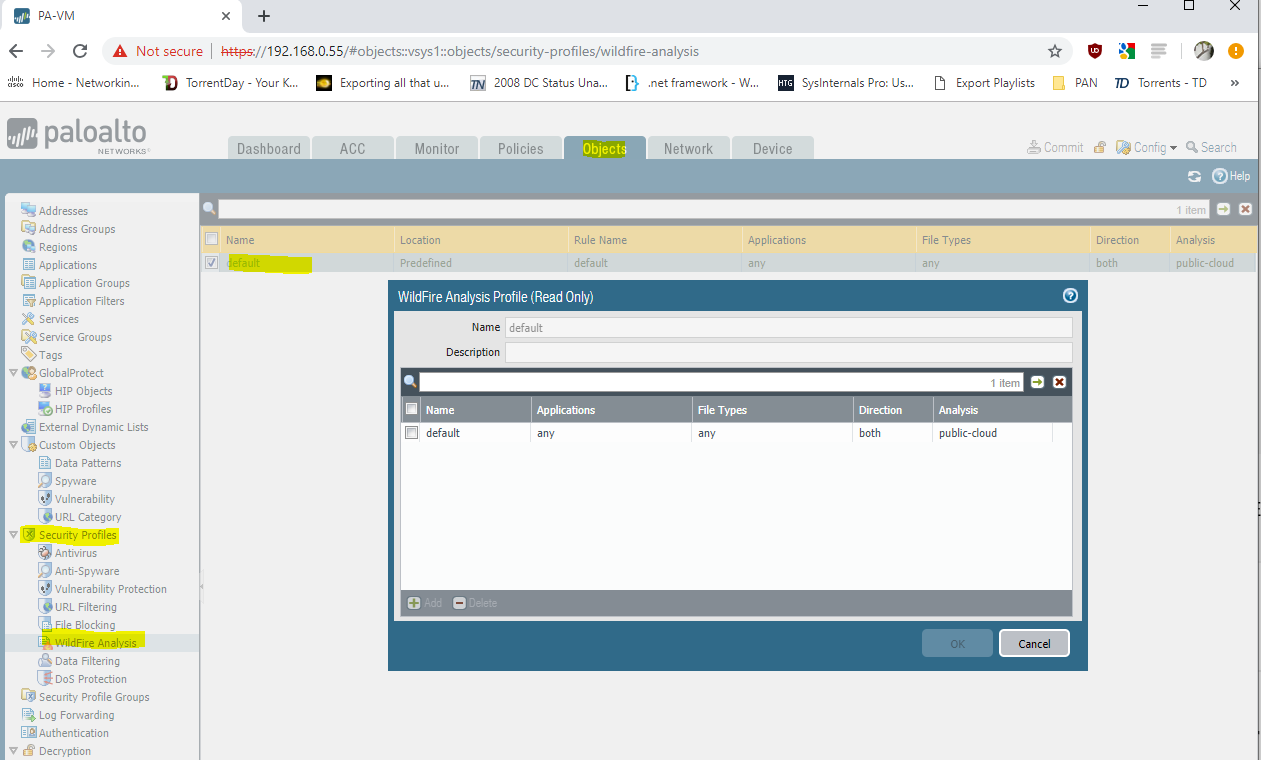 Names self explanatory, the location I’m not sure what that exactly is about, the apps and file types are covered under more details here.

to use it again you simply have to select which profile to use under whatever rules you choose under the security rules section. Policies -> Security

Now you can see that lil shield under the profile column thats the PAN URL filter we applied. now after we apply the wild fire… 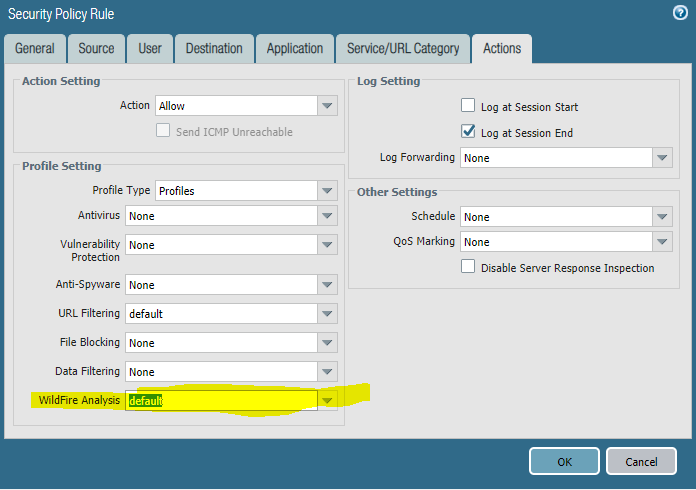 Don’t forget to commit…. and now we have the default protection of wild fire. Now this won’t help when users browse websites and download content when those sites are secured with HTTPS. The Palo Alto is unable to determine what content is being generated or passed over those connections, all the PAN FW knows are the URLs being used.

Following this site, which has links to download test file which are generate uniquely each time to provide a new signature as to trigger the submission. It’s the collaborative work through these submissions that make this system good. 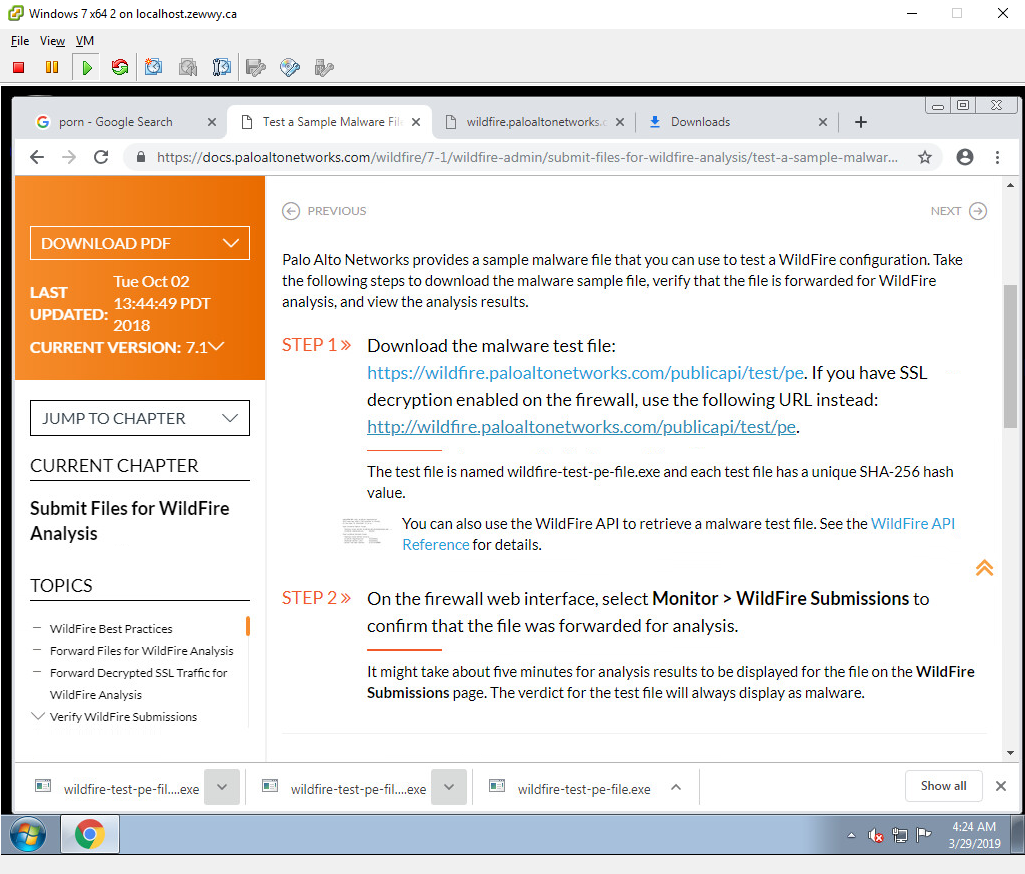 Checking the Wildfire Submissions section under the Monitor Tab.

There they are they have been submitted to Palo Alto WildFire for analysis, which I’m sure they probably have some algo to ignore these test files in some way, or maybe they use to analyze to see how many people test, who knows what things can all be done with all that meta data…. mhmmm

Anyway, you may have noticed that the test VM is now Windows 7, and that the user is till not defined, as there’s no user agent, or LDAP servers since this machine is not domain joined that wouldn’t help anyway and an agent would be required AFAIK to get the user details. I may have a couple features to cover before I get to that fun stuff.

As you may have noticed the file was still downloaded on the client machine, so even though it was submitted there was nothing stopping the user from executing the download file, well at least trying to. It would all come down to the possibility of the executable and what version of Windows is being used when it was clicked, etc, etc. Which at that point you’d have to rely on another layer of security, Anti Virus software for example. Oh yeah, we all love A/V right? 😛

You may have also noticed that there was 3 downloads but only 2 submissions, in this case since there is no SSL decryption rules (another whole can of worms I will also eventually cover in this series… there’s a lot to cover haha) when the test file was downloaded via HTTPS, again the firewall could not see that traffic and inspect the downloaded contents for any validity for signatures (cause privacy). Another reason you’d have to again rely on another layer of security here, again A/V or Updates if a certain Vulnerability is attempted to be exploited.

So for now no wild fire submissions will take place until I can snoop on that secure traffic (which I think you can already see why there’s a controversy around this).