A while a go I blogged about installing BitwardenRS, the on prem version of Bitwarden, which is amazing by the way.

Recently they announced they are changing the name to respect of the original project to avoid confusion.

You can follow this guys great video if you happen to use UNRAID (which I haven’t used myself but looks really neat).

If you followed my blog then you are running bitwardenrs via docker-compose.

In this case it was actually simpler than I thought.

If you are simply updating to the latest build with the same old name.

Step 1) bring down the Container

Step 3) Bring up the new container

That’s literally it, and it is super fast process.

However if you want to use the new image. You’ll have to change the name of the source project in the docker-compose yaml file: 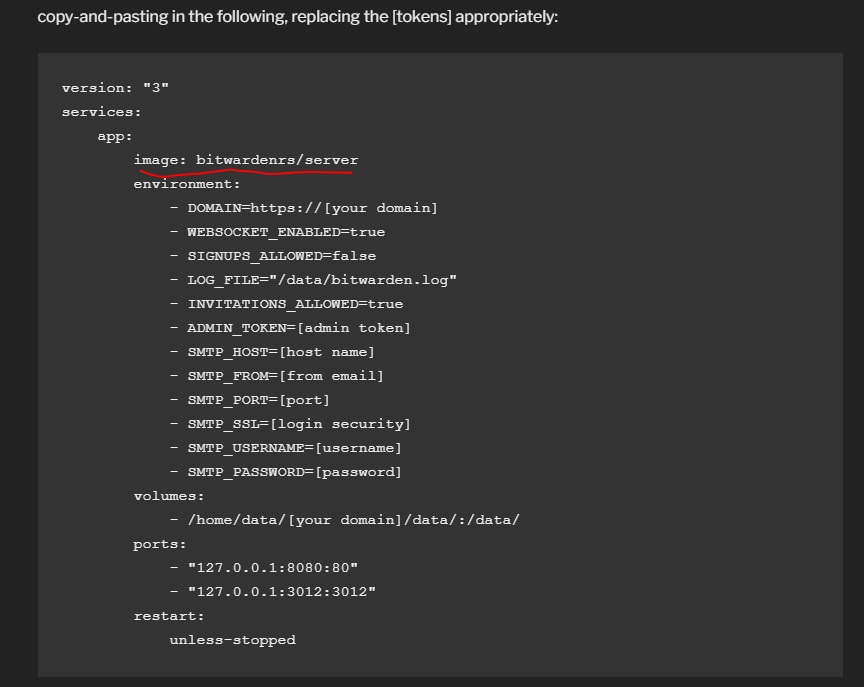 Then, just like before, bring down the container, pull new, bring up.

After updating I wasn’t first aware of an issue (as I normally don’t manage multiple users and orgs), however attempting to add a user to an org I got an error: SMTP improper Auth Mechanism selected.

No matter which one you pick the error remained (against a standard port 25 connection, anon). No matter what you entered in the “admin portal” under the SMTP configuration area, the same error would persist. My colleague started to dig through the source code, and the logic seemed clean. The issue seemed that once you configure specific “environment variables” (EG.
– SMTP_USERNAME=[username]
-SMTP_PASSWORD=[password]) that these for some reason are not being “overwritten” when defined in the admin portal. Since there was fields defined “[username]” the code was building a connection for auth, and expecting a proper auth mechanism. Since Auth Mechanism was never defined in the “environment variables”  and the bug of the settings of SMTP in the “admin panel” were not overwriting it would never hit the proper method in the SMTP code to make a standard port 25 anonymous connection.

To fix the issue you have to remove those two lines from the docker-compose YAML file.

Save the YAML file and bring down, and then bring up the container.

Super thanks to my buddy GB for the deep code analysis to help resolve this issue. 🙂