So the other day I installed a new version of Windows on a new disk, leaving all my old ones on my old drive available if I need something in particular. in this case there was something particular I wanted that was my putty sessions. I do use mRemoteNG, which saves most of my required sessions. However there were still a couple oldies used by putty and mRemoteNG will list these as well automatically as it simply references the same reg keys that putty uses to save them.

But what if the usual method as outlined here, don’t work as the system that has the stored information is not on my running instance of windows? As the answers all assume on major thing, the old system is able to be powered on and brought online.

In my case not so much…. so what do we do? Well this blog post defiantly provides major help in that regards. Basically covers loading offline hives and some caveats as a result of this procedure. Instead of having to read that whole blog I’ll paraphrase it here:

As for note 2 he uses and App called RegistryViewer. I have never used this app, and I generally avoid 3rd party apps as much as humanly possible. Specially for things that are pretty straight forward. The second method mentioned was to use a notepad editor to replace the problematic lines within the path. He goes on to say notepad can’t do this and to get notepadd++. While being a huge advocate for notepad++. regular notepad CAN do this, CTRL + H. So let’s so this…

Hold on a second.. where are the files “hives” we need to load on the old Windows files? I used this How-to-geek reference to help me answer this question.

*Interesting take away* “The registry contains folder-like “keys” and “values” inside those keys that can contain numbers, text, or other data. The registry is made up of multiple groups of keys and values like HKEY_CURRENT_USER and HKEY_LOCAL_MACHINE. These groups are called “hives” because of one of the original developers of Windows NT hated bees. Yes, seriously.”

“On Windows 10 and Windows 7, the system-wide registry settings are stored in files under C:\Windows\System32\Config\ , while each Windows user account has its own NTUSER.dat file containing its user-specific keys in its C:\Windows\Users\Name directory. You can’t edit these files directly.

But it doesn’t matter where these files are stored, because you’ll never need to touch them.”

Ahem… There are often times someone may need to “touch” the registry, more often then not devs of alternative apps that did decide to use the registry to store app settings probably didn’t even delete them when running their respective uninstallers I’ve seen this many times. Anyways we won’t go down that rabbit hole instead I need the reg files in the HKCU, and that apparently is in the NTUSER.dat file apparently… well fudge, there might be more steps involved here than I thought…

Found this OLD blog from 2003 with basic info I needed:

*Notes* It’s assumed that the offline Windows files are accessible to an online copy of Windows. how this is accomplished is up to the reader, direct HDD mounting via an open BUS on the mainboard, a USB enclosure with the offline file system mounted. Whatever the case maybe. 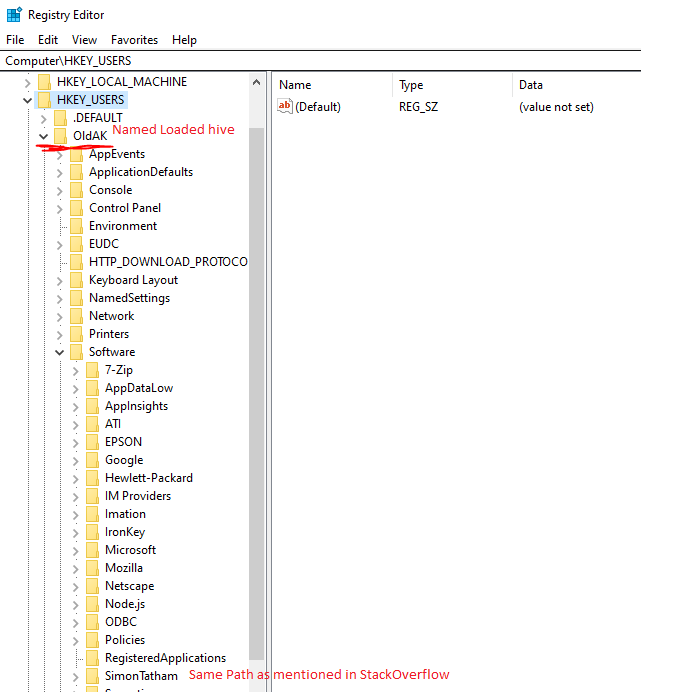 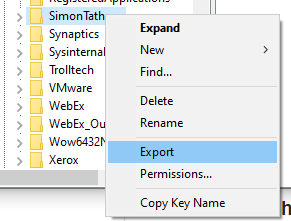 I saved my reg file under c:\temp

Now as mentioned in the source blog we need to clear the mounted Hive name from the paths within the reg file, so open reg file up in Notepad, press CTRL+H and enter the mounted name (hopefully picked something very unique) and include one \, while leaving the replace with field empty:

Don’t forget to save the file, and unload the hive. Now I can open regedit as my standard account, unelevated and try to import the reg file…

WHOOPS one thing I quickly noted was due to mounting it on HKU (since you can’t mount it on HKCU, we have to change all HCU to HKCU: 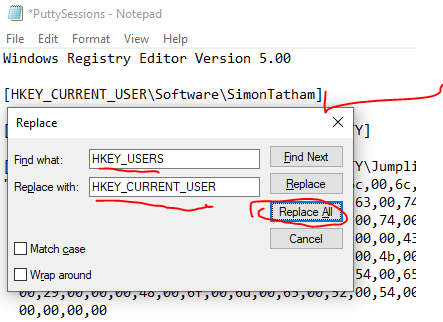 Now save the reg file and import.

Baaaaaam, imported in proper spot and opening up my mRemoteNG shows my putty saved sessions.

I was having issues with one of my saved sessions which relied on an SSH auth key. It turned out my USB key that held it was not mounted as the same drive letter as my old system. As soon as i corrected the drive path, the sessions worked.

Well I hope this helps someone…