This is a quick post. I’ve lately been streaming and I picked up this sick capture device the “StarTech USB3HDMI” I got this after EposVox, check out his twitch channel here, did a review of the product and posted it on youtube here.

This video really helped me out in making this purchase and configuring it to work with OBS. I haven’t tested this card with other capturing based software, and technically OBS is a streaming based software, but can be used to record the canvas of multiple input sources, so in reality way more powerful then basic video capture alone.

Anyway here’s the pictures of it working on OBS, as a device capture input and the settings to make it work for:

Composite AKA the Red/White/Yellow RCA plugs 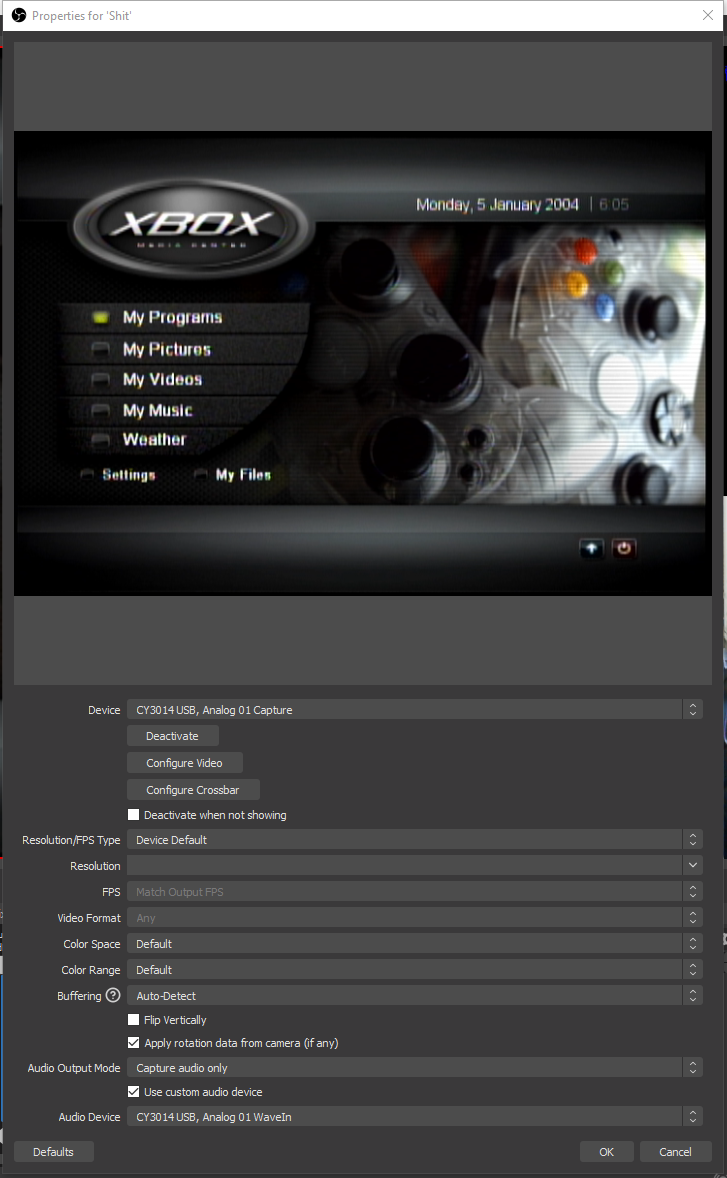 If you don’t see all these options try scrolling, the scroll bar is easy to miss. It’s important to pick the audio device here for the Red/White audio input to be picked up. There’s also addition settings when you click “Configure Video” which oddly enough includes some audio options…? 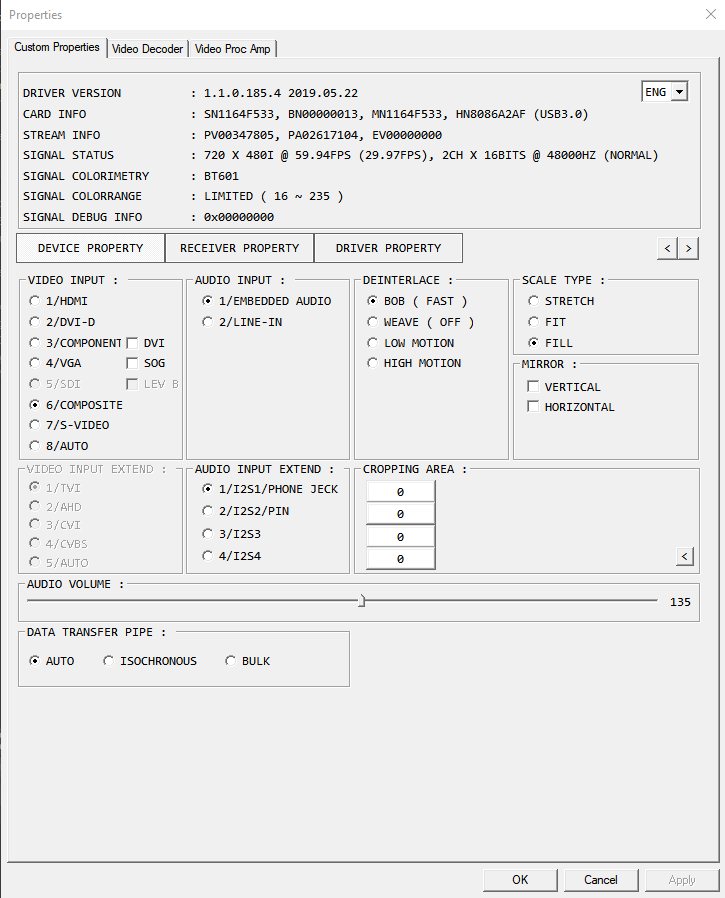 As you can see Audio input set to embedded. With video selected as 6/Composite. That’s it for that one. Sometimes I find you have to restart OBS or reseat the capture device for things to play nice.

Time to test VGA, to start this test I’m actually going to take my computer and power it on a standard VGA monitor, after the output is good, I will then switch it over to the capture card. 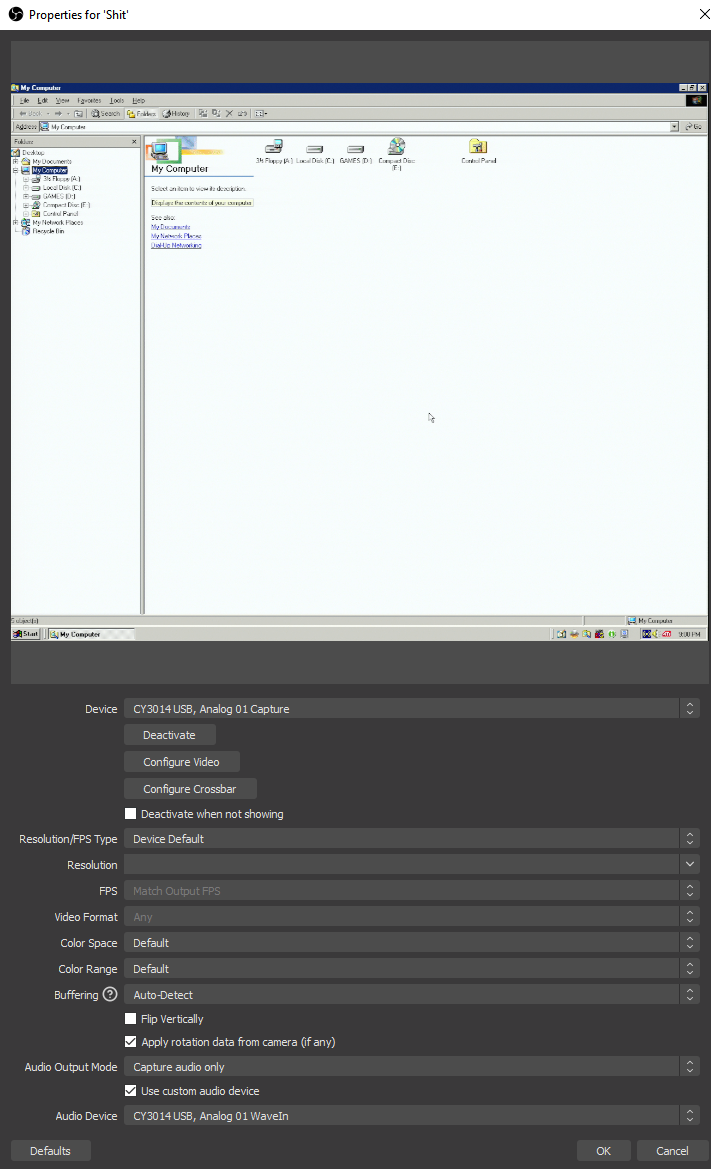 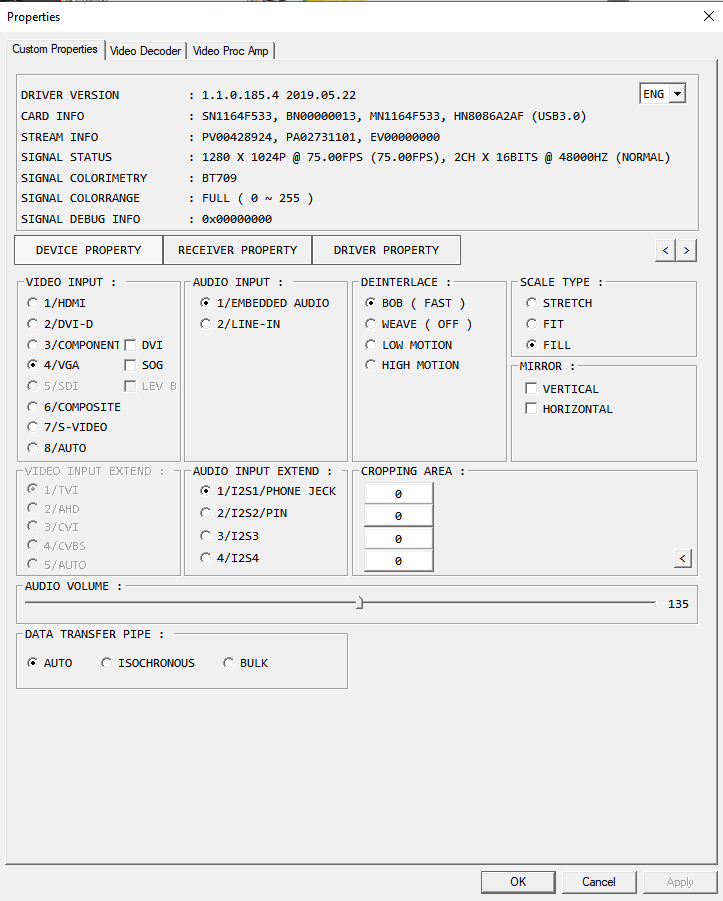 Oddly it didn’t show up at first, after I restarted OBS the source showed fine.

Now for this setup you’d almost assume that the device has a 3.5mm headphone jack or maybe RCA plugs for Audio in… but the only one is the ones available for composite, now you possible could go from a 3.5mm audio out to RCA in on the composite input of the capture card and use the same audio settings as the above composite, however I personally have not tested that.

For now I use the Line-In on my mainboard on the computer running OBS to capture to audio in this setup. If you’re capture computer doesn’t have a dedicated Line-IN or Aux in, then attempt the trick I mentioned in the previous paragraph.

The VGA is actually physciall done via a  DVI-I to VGA adapter that comes with the kit, and the fact it has a DVI-I capture input means it can grab analog VGA and digital signal on the same interface, and probably why this card costed as much as it did. So if you need to capture DVI, simply unplug the DVI-I to VGA adapter and plug the DVI cable directly into the capture card and pick 2/DVI from the device settings/properties as shown in the previous snippets from the RCA and VGA input options discussed above.

I do not have snips of this as (at the time of this writing) I do not have a DVI based device to capture its source.

Since Display port and HDMI are (for the most part) interchangeable (won’t discuss the technical details about features of each, and which version) but for the most part, it’s like USB, backwards compatible.

That being said it has a limitation of only 1080p, so don’t expect 4k capturing here. Also while the box did not define it, I’m also assuming 30 FPS or so, and not from my testing but from EposVox apparently decent latency (a couple hundred ms?) nothing worse than what a bad TV would give.